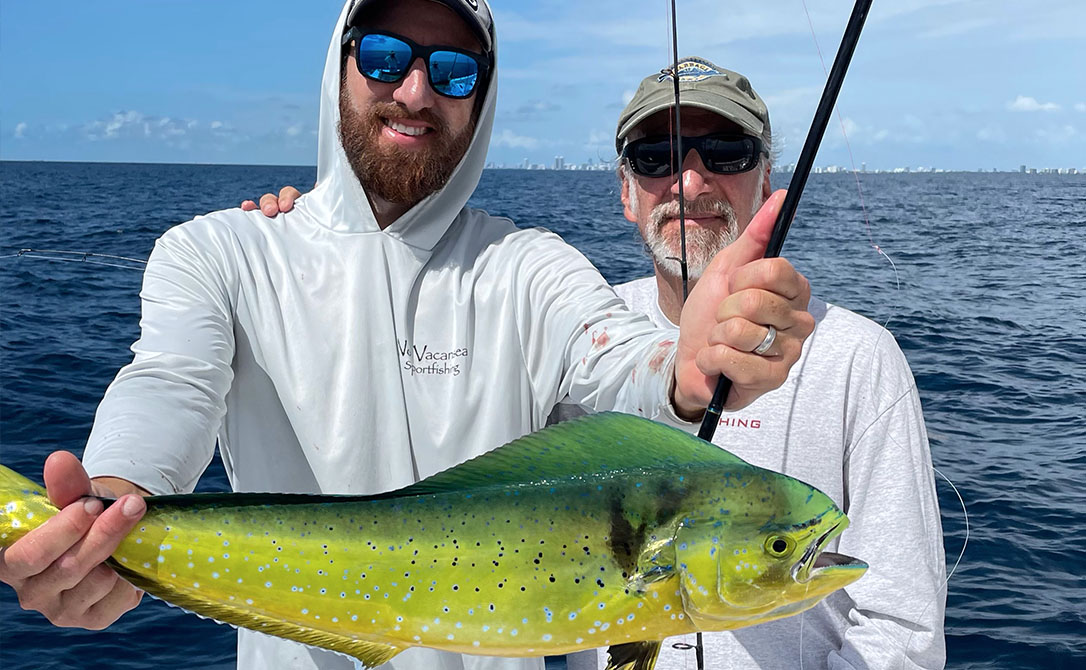 It used to be that May and June were the prime months to catch big dolphin in South Florida. But now, September and October are best for catching dolphin over 20 pounds.

While many anglers troll baits and lures along weedlines, Capt. Abie Raymond has developed a novel, yet highly effective way to target the colorful, tasty fish this time of year.

He uses a fishing kite to deploy skirted ballyhoo along weedlines and across weed patches. To dolphin, the lure-ballyhoo combos look like flying fish, which are one of their favorite prey species, and they aggressively chase Raymond’s kite baits. 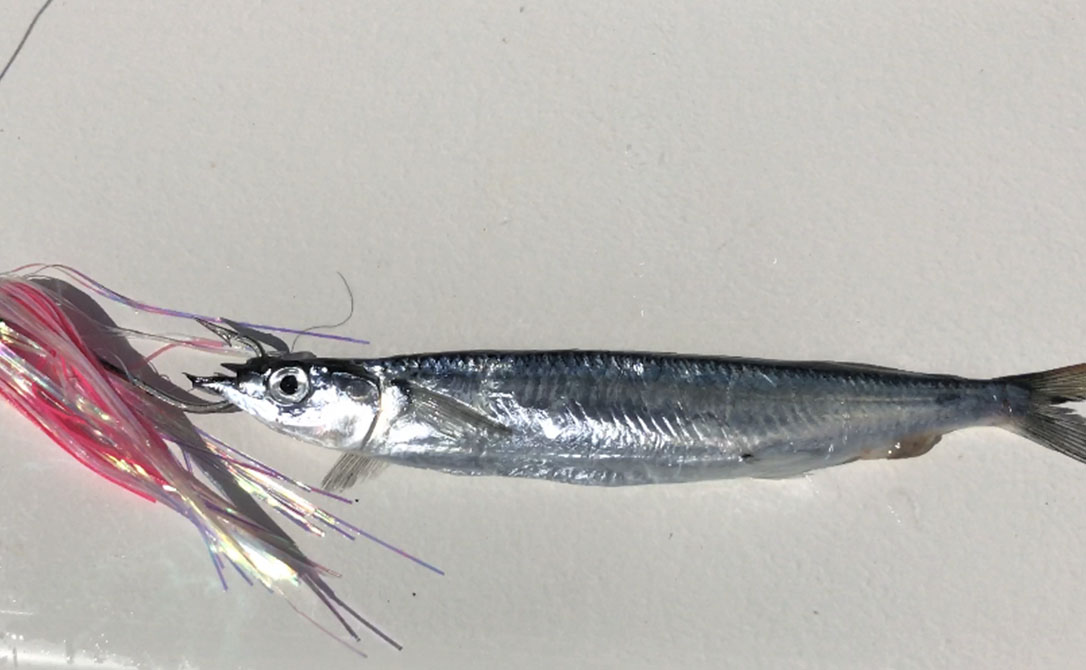 Among the many things Raymond learned during his work with Smith is being open to trying new techniques. That’s how kite-fishing weedlines with skirted ballyhoo instead of trolling those same baits along weedlines became one of his go-to dolphin tactics. 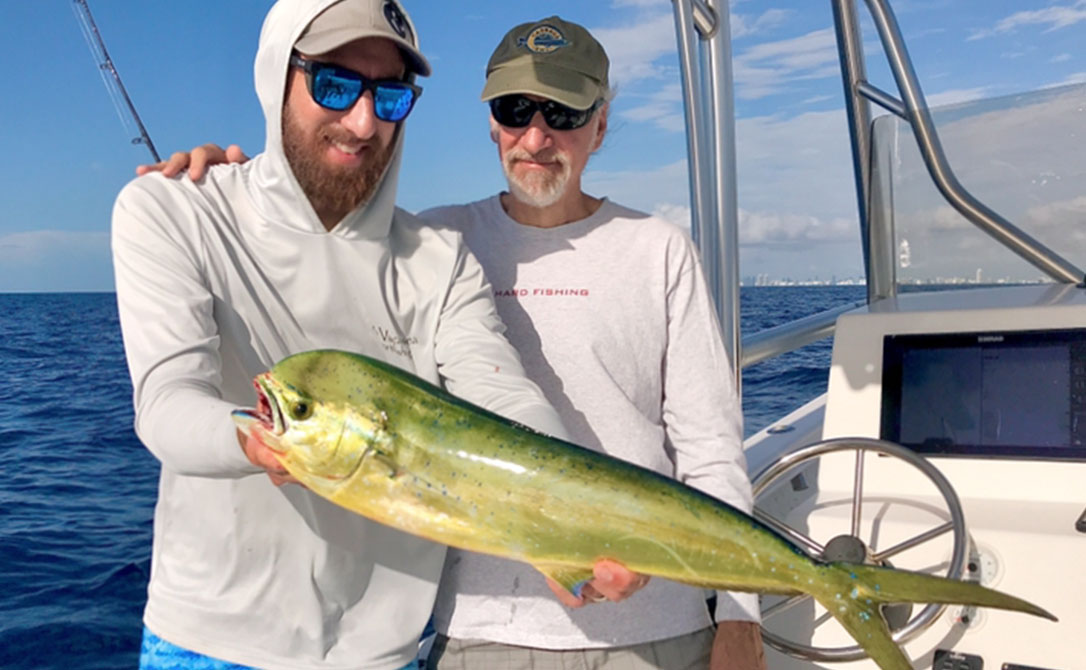 Raymond “snakes up” a dead ballyhoo by wriggling it back and forth with his hands to break the entire spine, which gives the baitfish life-like movement when it’s in the water. He also breaks the tail to prevent the bait from spinning, squeezes out any fecal matter, and breaks off the bill with an upward snap.

He inserts a 7/0 Mustad 3407 triple-strength J hook through both lips and through the front of the bait’s skull to keep the hook in place, and slides a weighted skirt or feather – a Jet Head, Billy Bait or Sea Witch – on top of the ballyhoo. He uses the lures more for their weight than for the visual enhancement provided by their colorful Mylar skirts.

“The weight helps keep it down because you’re flying it from a kite,” Raymond explains. “If you have no lead and there’s a little bit of breeze, it makes the bait sail in the air.”

The hook placement in the head instead of the belly, as in a trolling bait, is virtually weed-proof, especially positioned directly behind a skirt. That allows Raymond to spend much more time fishing. 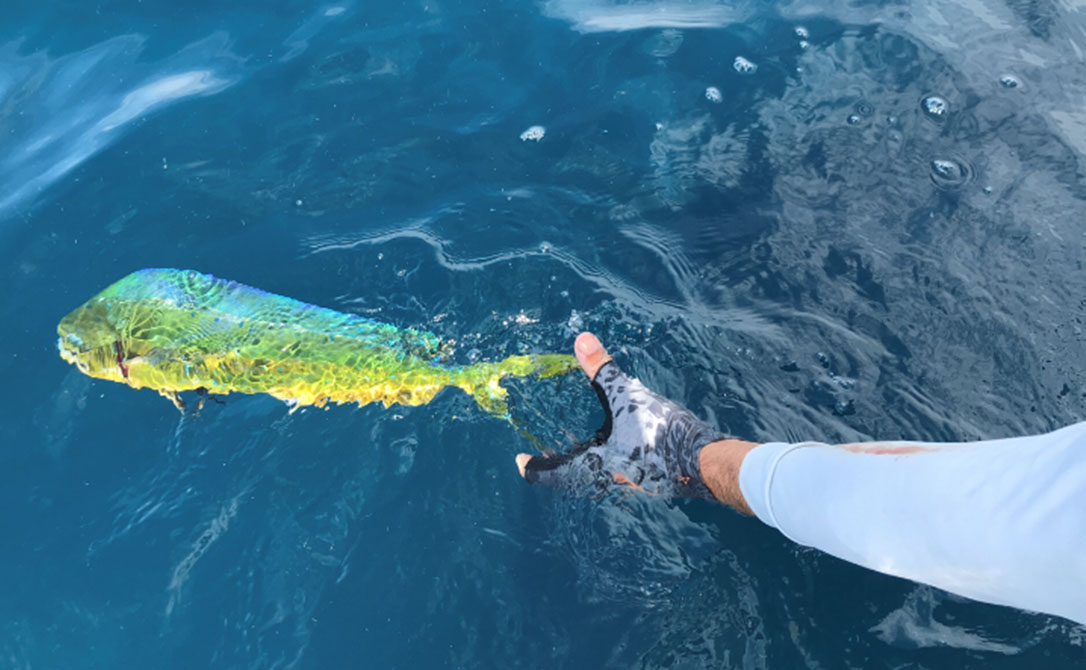 “If you have to go through patchy grass, it doesn’t matter because your hook is out of the water,” says Raymond. “We’ll drag the baits right over it, and that’s what makes it advantageous. Sometimes you’re not in an organized weedline, you’re in a scattered grass situation. You don’t have to worry about constantly picking grass off your baits. So that’s really the beauty of it, because it saves you on those real frustrating days. You just need to make sure that your baits are in the water.

“We fly the kite on the clean side of the grass, which is almost always the east side, in South Florida, because of the easterly trade wind blowing against the weedline. The boat is about 100 to 150 feet away. The flying fish swim on the clean side of the grass and that’s where we drag the ballyhoo to mimic them. But even if you get the baits over the seaweed, it’s fine, skip the ballyhoo like a flying fish.”

Raymond fishes his kite baits on eight-foot, 60- to 80-pound leaders. He employs the heavy monofilament to prevent big dolphin or sailfish from fraying the line. The leader is attached with a spider hitch and a Yucatan knot to 20-pound braided main line on Penn 7500 Spinfisher reels and 7-foot, 20-pound-class Capt. Harry’s rods. The rigs not only catch dolphin and sailfish but also blackfin and skipjack tuna.