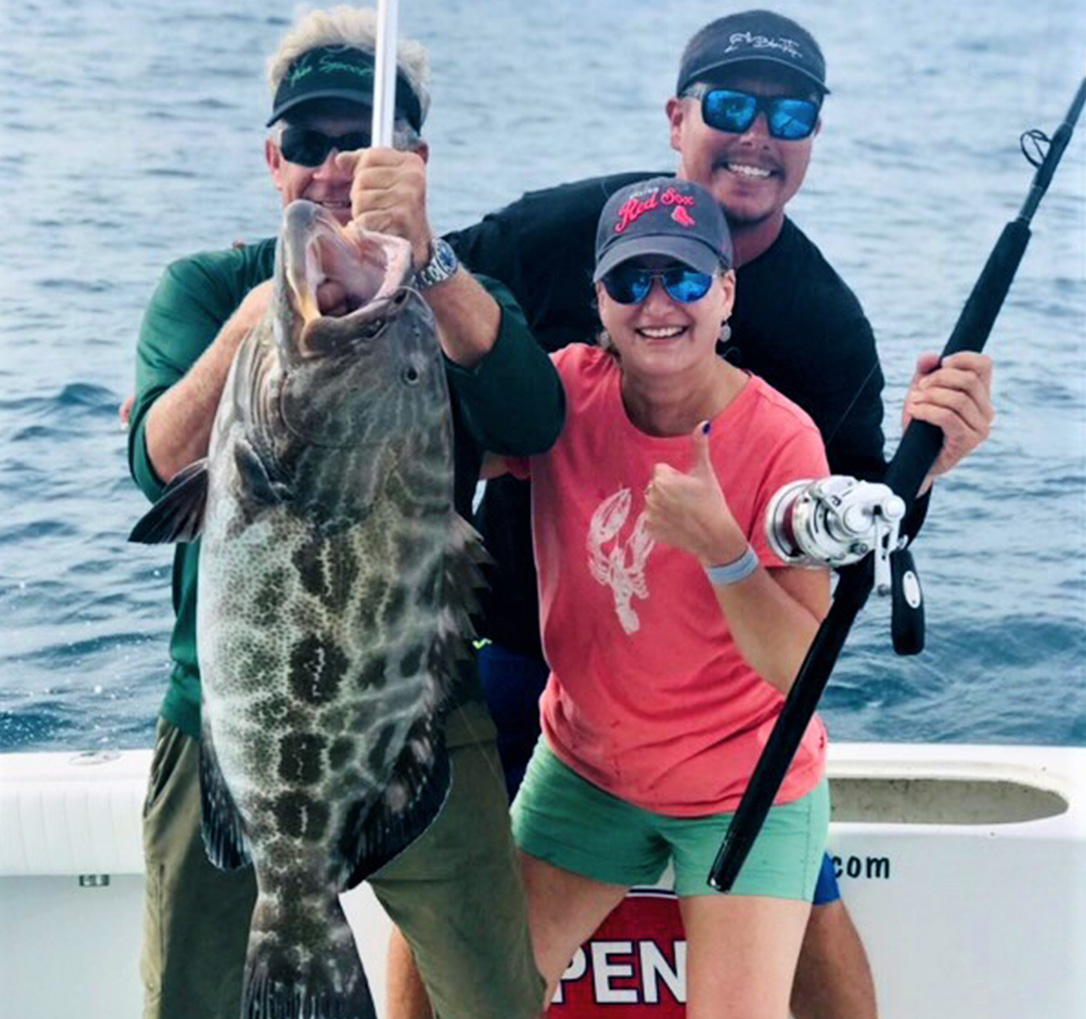 Grouper season opened May 1 after a four-month closure, and many South Florida anglers and divers will head offshore to try to catch or spear what is considered to be one of the region’s best-tasting fish.

“Grouper is my favorite fish to eat,” says Capt. Dennis Forgione, who specializes in catching grouper for his customers on Free Spool (www.freespoolsportfishing.com), his 43-foot charter boat that operates out of Haulover Marina in North Miami Beach.

The grouper season in Atlantic waters has been closed since January 1. (The hogfish season, which has been closed since Nov. 1, also opens May 1.) The closure was implemented in 2010 to allow the population of black, gag and red grouper to increase in number and in size as well as protect them during their spawning seasons. So far, that closure appears to be working, as anglers and spearfishers have been seeing and catching bigger fish.

The minimum size limit for black and gag grouper is 24 inches and reds must be 20 inches. Anglers and divers can keep a total of three grouper per day, but only one can be a black or a gag. The other two, or all three, can be red grouper.

Forgione, one of the expert captains who reports on where the fish are biting and how to catch them on the Nautical Ventures Weekly Fisherman radio show, which airs from 6-8 a.m. Saturday on WINZ 940-AM and live-streams on the Nautical Ventures Facebook page, says that anyone who targets grouper needs to fish bottom structure. That includes artificial reefs, wrecks, ledges, rockpiles and debris piles. 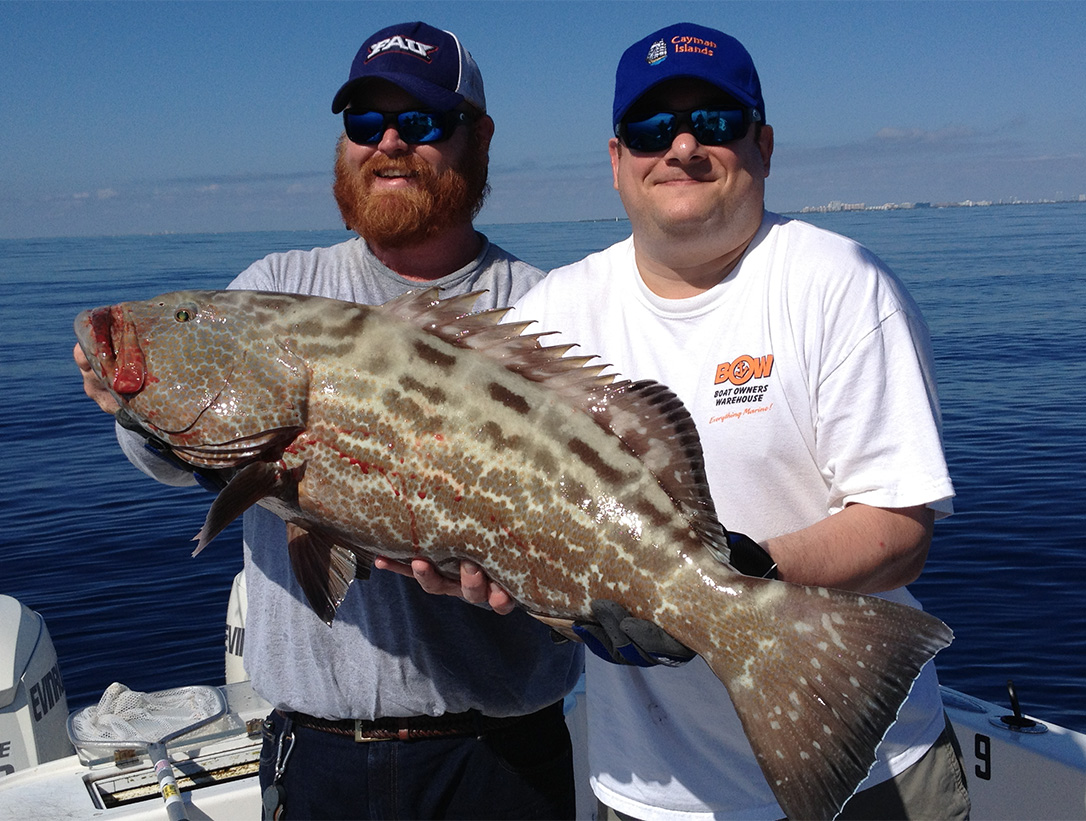 “That’s the most important thing, because grouper hang out on structure,” Forgione says. “Generally speaking, I fish structure from 80 to 200 feet of water from Hallandale Beach to Government Cut.”

The challenge in grouper fishing isn’t getting a bite, it’s getting the fish away from the structure after it’s hooked. The powerful fish head back to the shelter of the structure if they can. When that happens, anglers will usually break the fishing line on the sharp edges of the structure before they pull out the grouper.

Forgione uses heavy tackle to allow his customers to get the fish away from the structure. He fishes two-speed Penn International 30 reels, one spooled with 80-pound SpiderWire braided line and one filled with 60-pound SpiderWire.

“The reason we have two is when there’s a lot of current, we use the 60-pound SpiderWire because it’s thinner and we can get away with a little less lead,” Forgione says. “You need enough lead to hold the bottom when you’re sitting in one spot, whether it’s by the anchor or the boat’s motors.

“The stronger the current, the better the bite. I don’t think there’s such a thing as too much current for grouper, but you might not have enough lead. We’ve used 5 or 6 pounds of lead in 200 feet of water. That’ll tell you how strong the current is. I’ll have both engines in gear and the boat will be slipping backwards because the current is so strong. 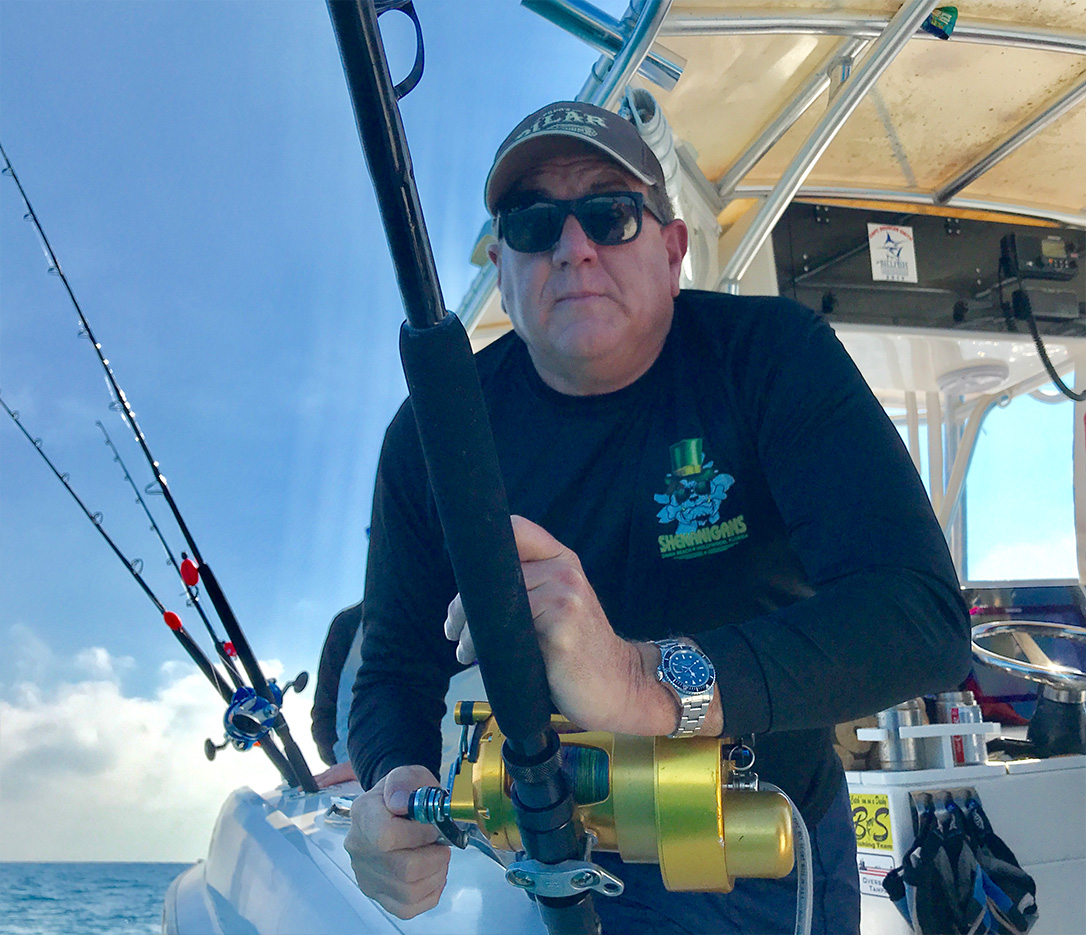 “I’ve got videos (on Instagram) of us pulling in grouper and people commenting that I’m trolling for them. I’m not trolling, I’m putting the boat in gear to get them away from the wreck.”

Forgione uses an 80-pound monofilament leader ranging from 20 to 40 feet in length, fishing the longer leader in strong current. He attaches the leader to the braided line with a swivel. But before he ties on the swivel, he threads the braid through the ring of another swivel so it slides freely along the main line. The other ring of the swivel has a small piece of mono with a loop. Forgione attaches his weight to the loop, which allows him to quickly remove and replace the lead when the strength of the current changes.

The leader is tied to an 8/0 to 10/0 circle hook, the size matching the size of the bait. Forgione’s favorite grouper bait is a live pinfish. “The second thing we go to is anything that we have,” he says, adding that grouper will bite everything from live goggle-eyes, blue runners and grunts to strips and chunks of bonito.

When a grouper grabs a bait, Forgione recommends leaving the rod in the rod-holder and reeling as fast as you can. He keeps the reel in low gear so his anglers have the power to get a fish away from the structure.

“When you see the strike, all you have to do is start winding,” he says. “If you’re drifting, put your boat in gear and power away from the wreck.”

“Be ready for a really good tug of war. Grouper are very strong.”