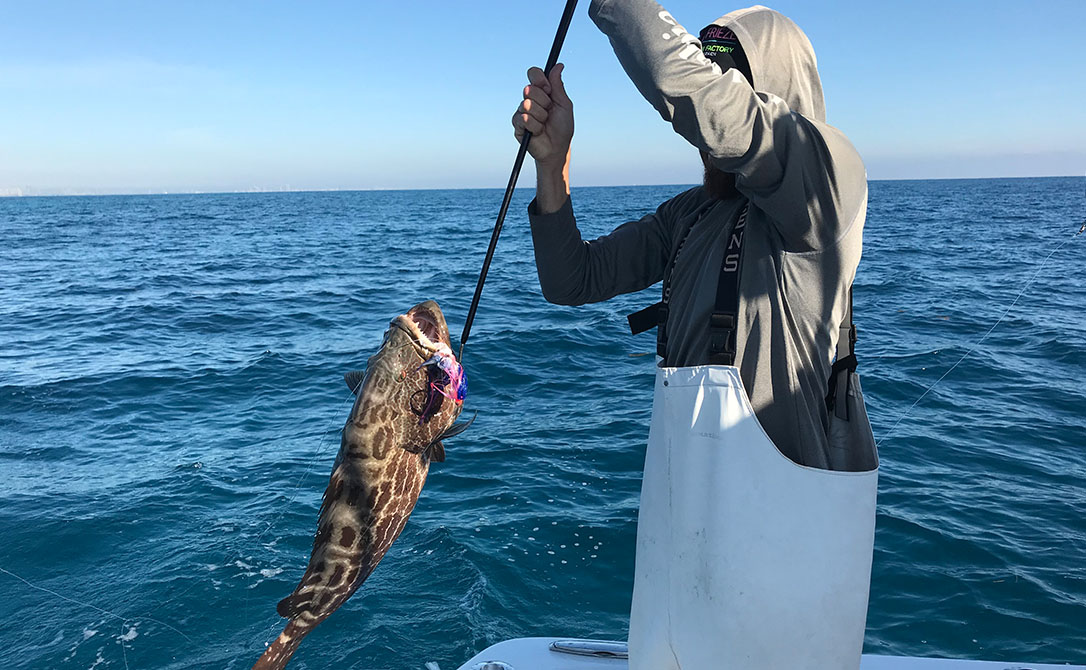 Black grouper are among the most prized fish in Florida for two reasons: They’re tough fighters and they are delicious to eat.

December is a prime time to catch black grouper in South Florida, in part because they’re abundant but also because the grouper season closes for four months on January 1.

It’s an old-time fishing tactic that is every bit as effective as more modern techniques. Trolling for grouper was perfected more than 50 years ago by Capt. Buddy Carey of Miami’s famed Pier 5 charter fleet. Smith is one of a handful of anglers who knows how to do it correctly, although he says it really isn’t all that difficult.

“They see something going by that looks like it might be edible and they’re out to get it,” Smith said. “They come charging up off the reef.”

Smith uses planers to get the bait near the bottom where grouper hang out. A planer is a small, rectangular, weighted piece of metal that is attached to the main line of a fishing outfit at one end and to a long leader at the other end.

When it is deployed, the planer, which comes in different sizes that travel at different depths, glides down through the water behind the boat. Depending on the size of the planer and how much fishing line is put out, the bait can be presented at a depth that will attract the attention of any fish in that zone. 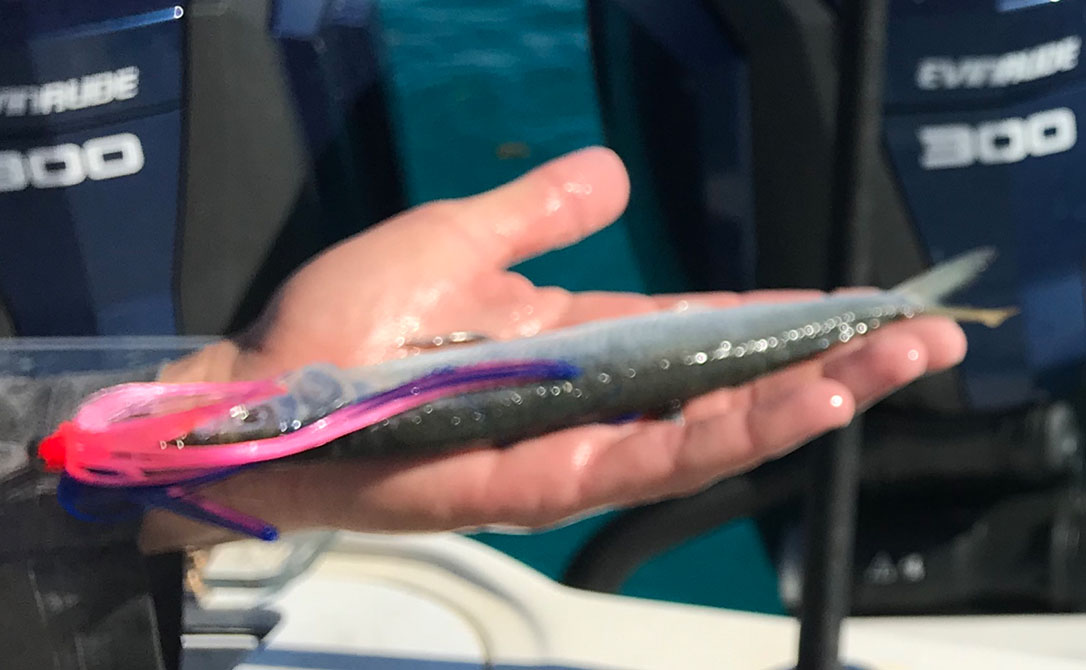 “The groupers on occasion will come up and hit it on top of the water, but basically you want the bait about 10 feet off the bottom,” Smith said. “Because if it’s real close to the bottom, they’ve got the advantage of getting back into the bottom. And if it’s too high, then a lot of them will say, ‘Oh, that one’s too far away.’ But generally speaking, they come charging up to get that morsel going by.”

Smith likes to troll a Sea Witch with a ballyhoo rigged on a 7/0 triple-strength 3417 Mustad J hook at the end of a 100-foot length of 100-pound monofilament leader connected to the planer. He uses a Penn International 50 spooled with 65-pound braided line to fish along coral reefs in 50 feet of water or less.

He added that anglers can learn how to precisely troll for groupers by practicing with a planer over a sandy bottom. When the bait starts hitting the sand, mark the fishing line and record the rpms of the engines. The next time you troll, run at the same speed and let out the same amount of line and you’ll know how far down your bait is running.

“You want to go by the most jagged part of the bottom,” Smith says. “If you watch your bottom machine, you’ll see it’s up and down, up and down. Every ‘down’ is a place for a fish to hide.”

In addition to reefs, Smith says the edges of the ship channels at Government Cut, Port Everglades Inlet, Lake Worth Inlet and Fort Pierce Inlet are all good grouper trolling spots using the same rigs and tackle. The channels can also be fished with lures.

The grouper season closure, which runs through April 30 in Atlantic waters, was implemented in 2010 to allow the populations of black, gag and red grouper to increase in number and in size, as well as protect the fish during their spawning seasons. 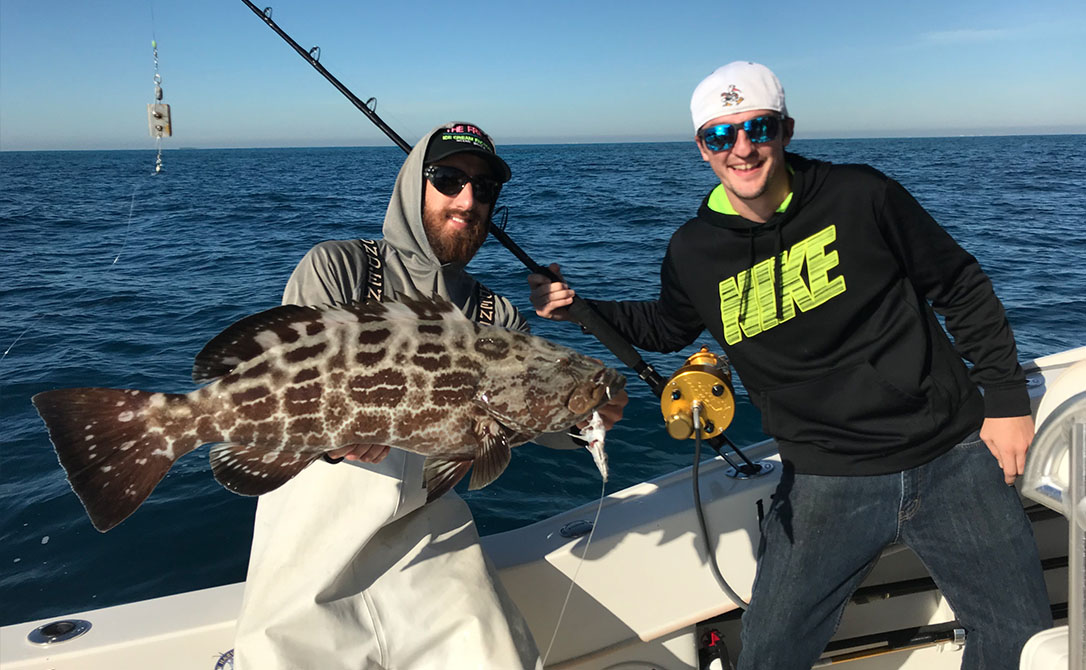 The minimum size limit for black and gag grouper is 24 inches and reds must be 20 inches. Anglers can keep a total of three grouper per day, but only one can be a black or a gag. The other two, or all three, can be red grouper.

So if you’d like to catch a keeper grouper before the year ends, try trolling. Otherwise, you’ll have to wait until May to enjoy a grouper sandwich.

For more fishing tips from Smith and other expert captains, listen to The Nautical Ventures Weekly Fisherman radio show every Saturday morning from 6 a.m. to 8 a.m. live on 940 WINZ, an iHeart station. You’ll learn where the fish are biting and how to catch them. If you can’t tune in live, the Weekly Fisherman radio podcasts are available through: