Navigating the Florida Keys by Boat

C'mon Ladies! Own Your Boat With Confidence! 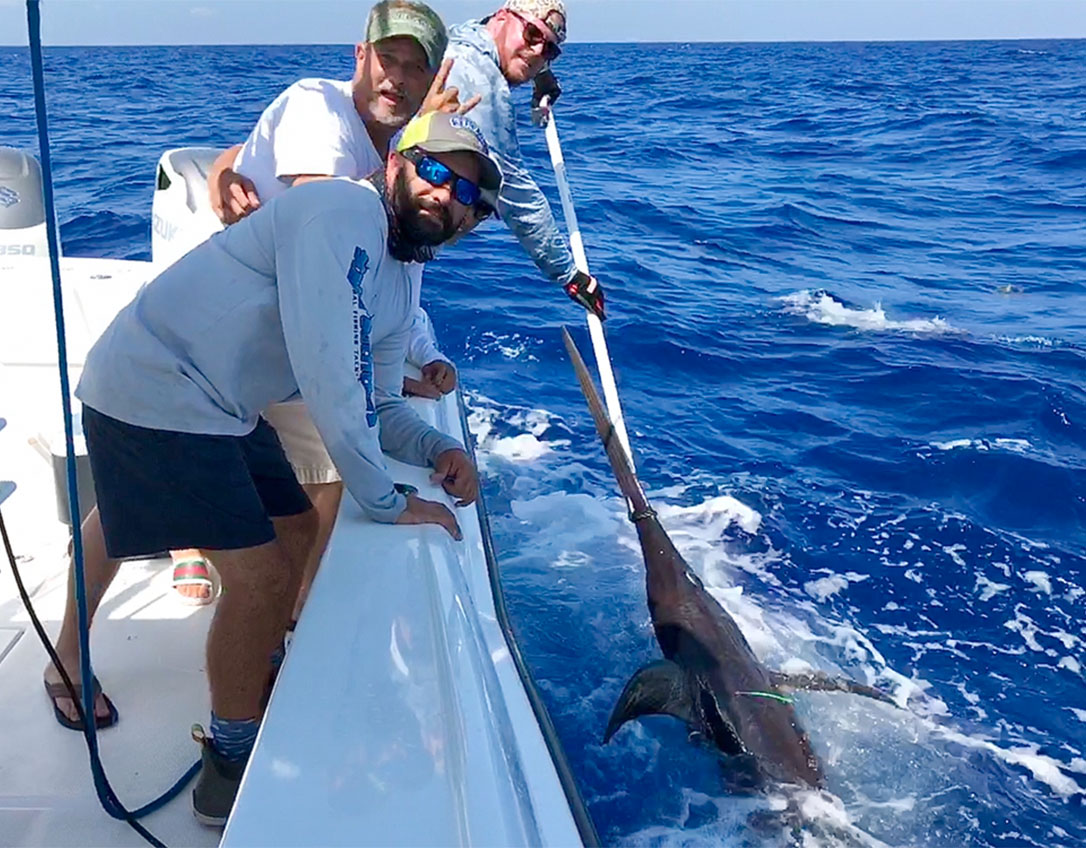 “I think it’s pretty cool that we got to put a satellite tag in a swordfish,” said Libasci. “That’s a once-in-a-lifetime opportunity.”

Libasci’s 33-foot Dusky was one of three boats that released a swordfish in the May 1 tournament. All three fish were tagged with Gray Fishtag streamer tags, also known as spaghetti tags, which have numbers printed on them.

More than 10,000 boats around the world place the tags in all types of fish species. When a tagged fish is recaptured, anglers can report the catch and the numbers, allowing researchers to know how far and how long that fish traveled and how big it grew since it was tagged. 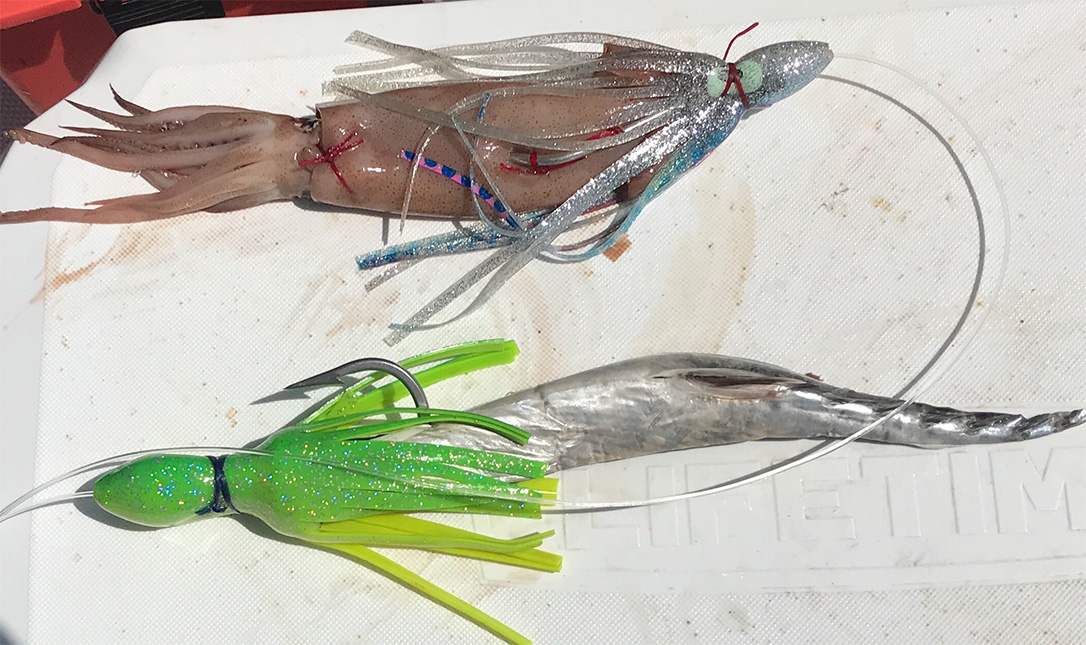 Swordquest tournament director Roxanne Willmer said tag returns have shown that amberjacks tagged off Miami have been caught off North Carolina. An AJ that Smith tagged off Miami was 17 inches longer and 55 pounds heavier when it was recaptured three years later.

Mine’s Bigger, a 36-foot Twin Vee owned by Chris Koulouvaris, took the first-place prize money after putting a satellite tag in the first swordfish of the day, an 80-incher estimated at 240 pounds, at 9:02 a.m.

The satellite tags will remain with the fish for four months before they detach and float to the surface, where they transmit data to a satellite. That information tells scientists at what water temperatures and at what depths the fish were swimming each and every day for that time period.

As Gray Fishtag Research president Bill Dobbelaer has noted, swordfish are usually caught near the bottom of the ocean during the day and near the surface at night. Satellite tags will provide information on where and when the fish spend time as they travel up and down. 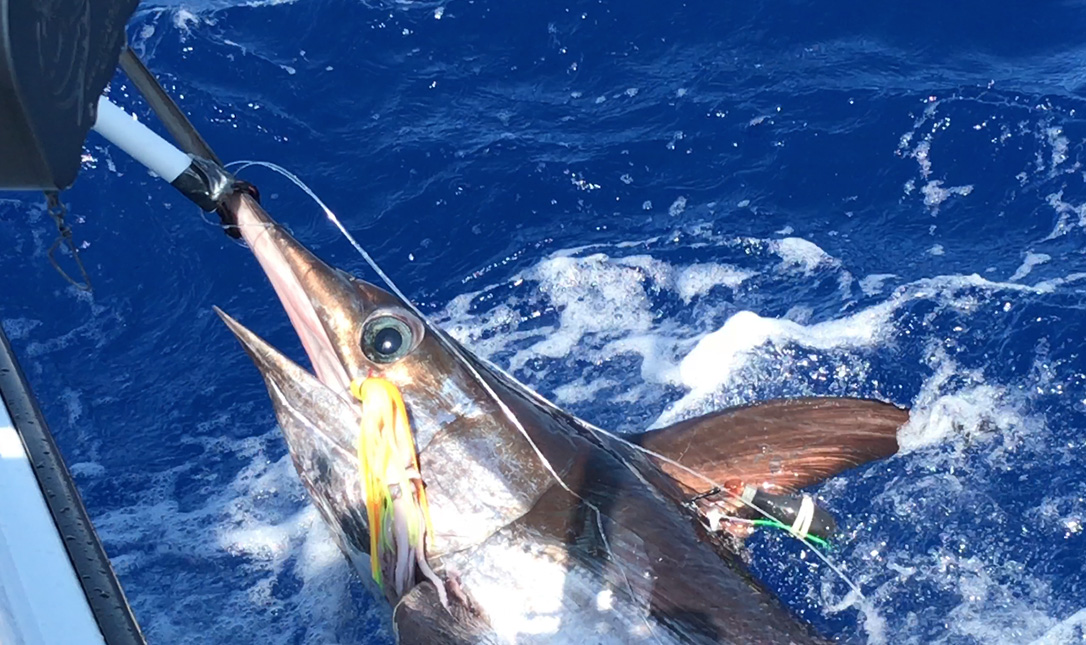 Willmer said the satellite tags from Wildlife Computers have an overall cost of about $5,000. Tournament sponsors helped cover the cost of the tags. Tournament prize money was based on the $300 entry fee and an optional $100 entry fee for the dolphin division.

She added that the data from the tags will be used to create maps of the swordfishes’ travels and it will be shared with the public through the website www.grayfishtagresearch.org and with state, regional and federal fishery managers.

“It was a unique event, the best of the best swordfish guys together to release fish,” she said. “It’s never been done before.”

Fishing out of Haulover Inlet, Forever Dusky started off catching dolphin while Smith positioned the boat to drop swordfish baits to the bottom. The team’s swordfish bite came on a skirted squid at 10:41.

As Smith noted, swordfish will eat a rigged squid 99 percent of the time over other baits such as bonito strips and dolphin bellies.

“Theoretically that fish came to the strip and ate the squid,” Smith said. “He had to go by the strip to get to the squid.”

When bringing up a swordfish that ate one of the two baits, Smith said it’s critical that a crew member cut off the uneaten bait and leader with scissors so the 12/0 hook in the bait doesn’t end up hooking someone.

“If someone grabs the leader on the fish and you’ve got another leader out there and that fish takes off, he can pull that 12/0 right into an arm or a neck,” Smith warned.