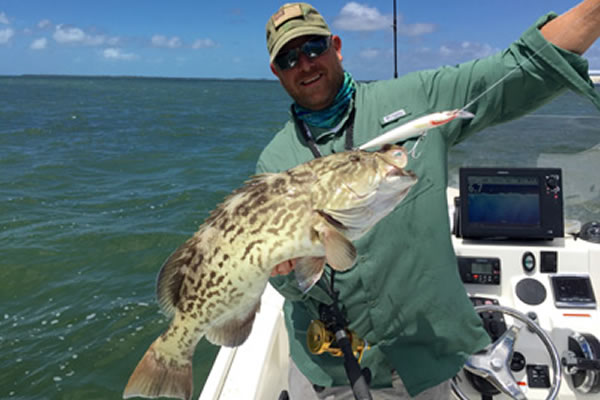 Anglers who think they need to run far offshore to catch dolphin, also known as mahi-mahi, in the Florida Keys can save on gas money and time while catching plenty of fish in shallow water.

“There’s been some really nice mahis caught offshore. We’re talking fish that are gaffer-size fish. A fish that’s too big to lift over the gunwale, but you want to stick a gaff in, that’s called a gaffer. They’re catching fish that are 10 pounds up to 30-pound fish, 40-pound fish.”

Clark added that the fall has become the prime time to catch dolphin in the Keys.

“This is what’s happened over the years. We’ve watched the dolphin fishing evolve from a May and June fishery to now late August, September, even into October,” said Clark, who co-hosts The Fish Guyz TV show on the Discovery Channel. “Last year we filmed a show in October and the first fish that we caught was a sailfish in like 30 feet of water, just inside the edge of the reef. In that real beautiful, clear water.

“The frigate birds were constantly working, we’d go over there and throw a couple of live baits out and we’d hook up two or three nice gaffer mahis, and we could’ve done that all day. People get all upset that the dolphin fishing isn’t good, but you know what? Just wait a little bit, wait until this time of year and I guarantee you’ll have plenty of opportunities.

“What happens is those mahis will push up on that shelf in 30 feet of water and they’re chasing schools of ballyhoos. You watch those frigate birds, if a frigate bird goes down, you’re going to have a chance to catch dolphin. And you can catch everything in there. In that shallow water, those fish are in there eating the bait. We’ve seen bluefin tunas that look like cars swimming around in 20, 30 feet of water.”

For the latest, most up-to-date fishing reports from Clark and other South Florida saltwater and freshwater experts, listen to The Nautical Ventures Weekly Fisherman radio show every Saturday morning from 6 a.m. to 8 a.m. live on Fox Sports 940 Miami, an iHeart station. If you can’t tune in live, the Weekly Fisherman radio podcasts are available through: