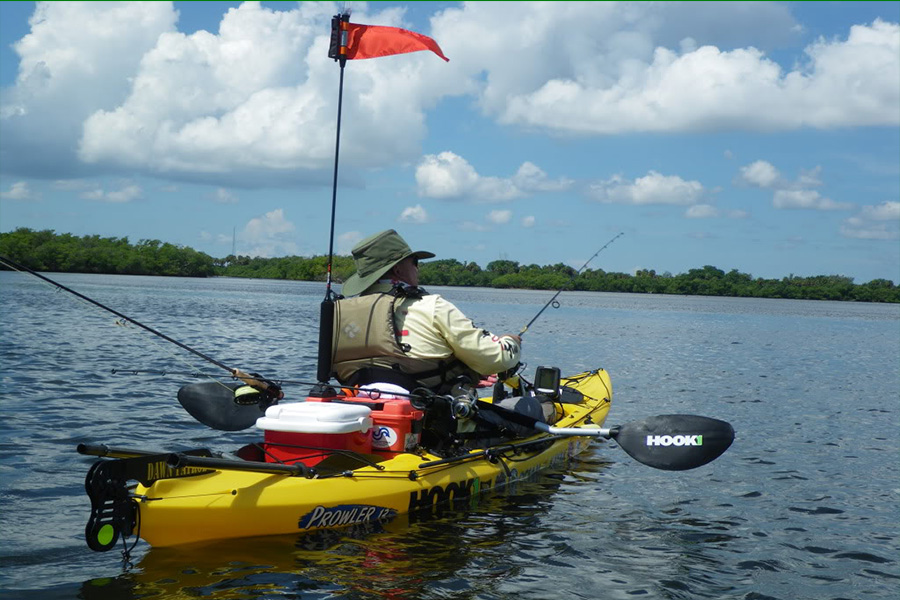 At a recent Surf Expo in Orlando, I sat in on a seminar dealing with Kayak safety. Specifically, with more and more kayaks out in the ocean, usually associated with Extreme Kayak Fishing, the need to raise a safety flag so that approaching vessels can see you is of critical importance.

The very next Saturday I was listening to The Weekly Fisherman radio show, hosted on WINZ - an iHeart Station. One caller made a request to the show's host to petition the local Kayak Fishing community to utilize safety flags. It seems he had a close call avoiding a low profile kayak that was out 3-miles and had no flag. The boat's high rate of speed along with limited line-of-sight made for a potentially dangerous encounter.

Not a week later I saw on the news where a boat did hit an unmanned kayak while the kayaker was spearfishing in deep water. The kayak had no safety flag. Fortunately, no one was hurt. This made for three occasions in as many weeks where the subject of safety flags came into the conversation. The law does not mandate a kayaker to carry a safety flag, such as divers are required to float a dive flag.  But common sense dictates that a smaller, lesser visibility vessel boating in a sea of larger vessels should take precautionary measures to increase the odds of being seen.  Much like a cyclist sharing the roads with cars & trucks.

At Nautical Ventures we encourage our clientele to use safety flags when coexisting with power boaters in the same marine environment. The new flags these days are easy to use and collapse easily so as not to interfere with one's fishing activity. They are easy to install, and some models have 360-degree safety light on top for nighttime visibility.

Nautical Ventures has been helping kayakers in the Fort Lauderdale / Hollywood / Palm Beach market stay safe on the water for over 30 years. We offer a complete line of Kayak and SUP safety gear along with the expertise to install it.